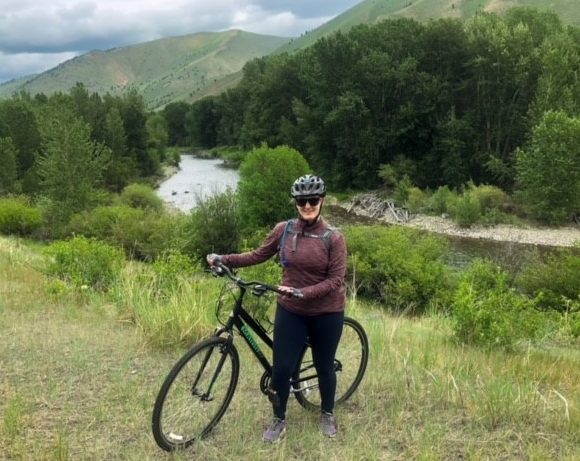 2020 has slowed down travel for many, if not most of us, so when my parents decided that they were going to drive from Houston, Texas to Sun Valley, Idaho for the month of June to avoid the Texas heat, I was overjoyed – not just because they were close enough for me to go visit them from Seattle, but also because I had spent nearly 100 days in a room with only my dog and cat and was in desperate need of some human connection.

To my great pleasure, Sun Valley turned out to be incredibly beautiful and a much needed escape, even if only for a few days, from all that 2020 had entailed.

When I started to look into the area a bit before the trip, I learned that it’s actually known as a celebrity hot spot with people like Tom Hanks, Arnold Schwarzenegger, and even Oprah having homes here. Naturally, I spent the entire week looking ahead on the trails hoping to casually bump into Oprah!

I ended up flying because the drive would have been more than 10 hours and through the mountains, which I am not particularly comfortable driving through alone; and the airline experience was definitely unique. I felt pretty comfortable given that no one was seated directly next to me, but the plane was small, so it was still much closer than I would have preferred during this Covid-19 era (as in much less than 6 feet between me and those around me). I brought wipes and wore gloves while I wiped down everything I could possibly touch.

A Broad Recommendation: Don’t forget to pack wipes containing alcohol, so that you can wipe down your tray table, seat back pockets, seat belts, and anything else you may touch during the flight. One spot some may not think of is the air slot above you, in case you get too cold and want to close it!

Once I landed in Boise, my mom met me, and we drove the three hours to their rented condo in Sun Valley. We still had a bit of sunlight left when we got there, so we were able to make it to the short hiking trail nearby, Prospector Trail, and stretch our legs after a day full of sitting.

The next day, my parents and I hiked Fox Creek Trail, which was less than a ten minute drive from our condo. This trail was a loop and was just under 6 miles; it was moderate as far as difficulty with one exception on the way back down. Both my mom and I were very nervous due to the steep decline and narrowness of the trail – I think I babbled on about watching celebrity Who Wants to Be a Millionaire to distract us from what looked like our pending doom.

Once we were back in town, we had dinner and ‘medicinals’, as my dad calls a post-hike beer, at Whiskey Jacques’. This restaurant was only seating upstairs – where the outdoor patio was located – and all tables were much more than 6 feet apart, so we were really able to relax and enjoy the evening.

We were cognizant to mix up our hiking and biking so we wouldn’t get too sore, so the next morning we headed into town to stop by PK’s Ski and Sports where I could rent a bike. I immediately fell in love with the dog at the shop whose name is Gryff (for all you Harry Potter fans out there like myself – yes that is short for Gryffindor)!

The owners of the shop were super helpful and got us in and out quickly so we could spend more time actually riding our bikes. We then drove down the large hill before biking the approximately 10 miles to Hailey, which is one town over. We ended up doing this ride a total of three times during the week, biking into town and then stopping at The Wicked Spud for a drink or two before biking back to Sun Valley.

That first 10 mile ride after a couple of beers was not easy, but with the advice of my parents that ‘practice makes perfect’, I was a pro by the third time around – haha.

We got back into town and dropped off my bike before heading to the Sawtooth Brewery for dinner. This was my favorite of the restaurants we went to; in fact, I made us go more than once because they had the most versatile menu for us non-meat eaters. The hummus plate in particular was awesome.

We were back to hiking the next day – well my mom and I were, while my dad was mountain biking because we are just not as cool as him!

We headed to Ketchum and the Greenhorn Trails, and we realized a bit into our hike that we didn’t go the way we had planned; so, we ended up crossing over a couple of different trails, including the Cowhorn Trail and Cow Creek Connector trail, to get us back to the car.

Along these trails, there was some unique vegetation, and the trees were still recovering from a wildfire back in 2014. These trees were honestly super beautiful in their own right, just not in the way much of our other hikes had been that week.

Our timing was perfect, as we got back to the car at almost the same time as my dad. His ride had been much rougher than ours, as he took a path with steep elevation – so steep that he turned around and came back the way he started rather than risking finishing the loop to come back down. He had one fall and lost a glove, but considering he had a cut near his eye that looked like it might bruise, he was pretty lucky (and the bruise didn’t get to a full black eye).

The next day, I decided to take a rest day to write and catch up on a bit of work, while my parents went out for another adventure. Before they left though, we did a virtual yin yoga class together, and when they got back, we had a nice dinner of fresh scallops and wild rice that mom made at the house.

The next day, we hopped in the car and drove about an hour away to the other side of the Sawtooth Mountains where we hiked the Altura Lake Trail. The drive after was beautiful, though a bit nerve wracking, as my dad was taking some of the turns on the mountains a little fast for my taste.

This trail was unique in that the first leg of the trip is a decommissioned road until you cross over a bridge. The difficulty wasn’t too bad, though the elevation did pick up quite a bit if you did the full trail. We turned around about 4.5 miles into the 5.5 mile trail, as we started running out of steam and didn’t think we could do a full 10 miles that day.

For each of my last two days in Sun Valley, we rented my bike and did the Wood River Paved Path to Hailey and back again; the last time, we went an extra stop so that I would hit a full 20 miles round-trip because my dad kept teasing me that I hadn’t actually done 20 miles, given that our normal route only came out to about 19.5 miles.

I left on Sunday, Father’s Day, and my mom drove me back to Boise for my flight – and my dad said this was the best Father’s Day gift we could have given him because he got to be alone after a week of constant talking, haha.

Overall, I would highly recommend a trip to Sun Valley – we will definitely be going back so I can learn to ski there at some point!

Had you ever heard of Sun Valley before? Would you consider visiting? Leave us your thoughts in the comments below, and check out some of our other close-to-home adventures we had in 2020!

Dad and I LOVED having you in Sun Valley with us. Looking forward to more time spent there in 2021!!