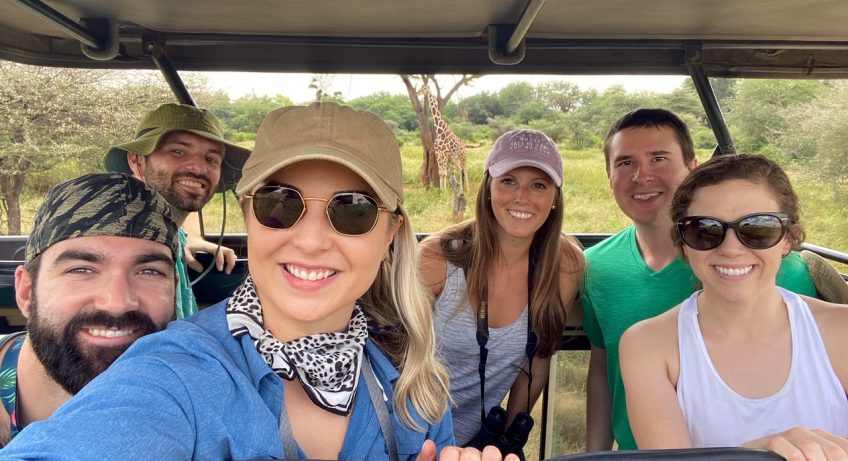 If you’ve opted out of reading our longer Kenya post and are just interested in learning about what we did in the Samburu National Reserve, then you’re in the right place! Let me catch you up first, so you have a bit of context.

It’s Tuesday, February 4, 2020, and we are on day 4 of our trip when we make it to the Samburu National Reserve.

Of our eight planned, action-packed days in Kenya, we spent a day and a half exploring the Samburu National Reserve in Northern Kenya. Tim and I finally arrived in Nairobi late the night before, and the full crew woke up early to embark on our very first game drive of the trip!

Samburu National Reserve is about five to six hours from Nairobi, and the roads are a little bit bumpy along the way. We left around 8:30 AM, drove for about half the day and stopped a couple of times for lunch and souvenirs before arriving at the reserve.

Samburu National Reserve is a game reserve on the banks of the Ewaso Ng’iro River and is the most popular park in Northern Kenya. It’s known to provide some of the best and most colorful game viewing in the country, to include gerenuks, Grevy’s zebras, oryxes, Reticulated giraffes, lions, cheetahs, African leopards, elephants, Cape buffaloes, hippopotamuses, Olive baboons, warthogs, Grant’s gazelles, Kirk’s dik-diks, impalas, and waterbucks. Black rhinoceroses were reintroduced after a twenty-five year hiatus due to poaching, and there are more than 350 species of bird in the park as well.

As we proceeded to drive through the park, we were all very excited to almost immediately come across a troop of Vervet monkeys, a.k.a. “blue-balled” monkeys, lots of elephants and their babies, and a beautiful, lone giraffe, all of which were practically an arm’s length away from our vehicle.

Around 7 PM, we arrived and checked in at Samburu Intrepids Lodge, a camp that offers 27 tents overlooking the river and a charming, open dining area to relax and enjoy a meal. The camp also had a swimming pool, a boutique for souvenirs and safari essentials, massages, and access to email, fax, telephone, WiFi and postal service.

Basically, we were glamping (or camping on steroids) in the middle of the reserve. Our rooms were legitimately tents but also had two beds, surrounded by large, hanging mosquito nets, a sink, a toilet, and a shower. It’s notable that there was no fridge, television, WiFi, or heat/AC in the rooms, and the power was conserved between the hours of 12 PM and 3 PM and again from midnight to 5 AM each day, so that meant no overnight phone charging!

A Broad Recommendation: It’s always a good idea to bring along a portable charger on any international trip, but it would be especially useful to have one for the long car rides and overnight camp stays where charging your phone isn’t possible.

We were treated like royalty during every meal here. For dinner, we had several options for salad/soup, aperitif, main course, dessert, cheese and crackers, and coffee or tea, and everything was delicious! All of our meals were included with our package, but drinks were not; this means that we had to pay for water, which we needed to stock up on constantly because you can’t drink the tap water in Kenya. We were surprised to find that curry was an option for many of the meals on this trip. Allison and I are both big curry lovers, so this was a true treat for us!

Unfortunately, due to all of the traveling, I started feeling pretty bad by the end of the first full day and matters only got worse at night. Luckily, I had brought basically an entire medicine cabinet with me, so I was well-equipped with Mucinex, DayQuil, NyQuil, cough drops, and the works to ward off some of the respiratory symptoms I was having.

A Broad Recommendation: Always come prepared with first aid and any medicine you are accustomed to back home in case you get minor cuts, bites, etc., or sick. This includes bringing feminine products, ladies! Being sick or uncomfortable can ruin a trip of a lifetime, so it’s always best to be prepared.

The rooms got a little toasty at night, so that made for some pretty miserable sleep while I was sickly; and, the hot water never heated up in the shower the next morning, but in this case, I actually didn’t mind, since I had been burning up all night.

The next morning, we headed to breakfast around 7 AM to fuel up before our morning game drive, and it was truly a treat! They had an omelet station with all kinds of yummy toppings, and there was a buffet of eggs, bacon, sausage, potatoes, baked beans, fruit, bread, etc.

Once we got out there, we almost immediately ran into a troop of baboons in the middle of the road. Our group kept joking about wanting to see baby animals, and this sighting certainly did not disappoint! There were tons of adult and baby baboons, and they were RIGHT next to our vehicle.

A Broad Recommendation: you actually should be very careful around monkeys, as they are smart and can get into just about anything; they also carry debilitating diseases like rabies, so steer clear of touching any of these guys.

Then, we saw this little guy (or gal) with his (or her) momma. How adorable! We were all obsessed. I’m sure Dennis explained to us whether the baby was male or female, but I can’t remember, and it’s hard to tell since all African elephants have tusks. I had learned in Thailand that female Asian elephants don’t have tusks, so that’s how you can tell them apart.

Emily also took this opportunity to take the world’s cutest selfie with the momma and baby elephant!

The Ewaso Ng’iro River, which cuts through the otherwise dry country, acts as a magnet for thirsty animals, and several herds of elephants were gathered along the riverbank when we passed by. We watched them play and bathe here for a good while, and then, we even spotted a crocodile!

Dennis let us know that over time, an elephant’s tusks will get worn down from so much use like the elephant shown here.

We saw many more elephants, giraffes, impalas, dik-diks, antelopes, and various species of birds, to include an eagle, before heading back to the lodge for a break and some lunch.

And, we obviously needed some group giraffe selfies!

After another amazing, several-course meal, we enjoyed some much-needed relaxation time at the lodge’s pool before washing up and getting ready for our afternoon game drive.

We made our way back out into the park around 4 PM. Not only were all of the animals incredible, but the scenery around us was also breathtaking with mountains in the distance and unique trees speckling the landscape.

It was basically the day of elephants and baboons because we ended up seeing a ton more of them on this game drive, including some babies – our favorite! And, naturally, we took one million pictures.

Oh, and did I mention, there were hundreds of billions of locusts swarming around everywhere we went? At the time of our visit, it was the beginning of the worst locust infestation across East Africa in more than 70 years, devastating crops and increasing fears about food security across the country.

What was fun about these little guys though was that every time one would get into the vehicle, Bryan would freak out, and we would all start laughing. He hated them so much that we even had to close our windows at times!

Back at the camp, we took some cute couple shots before heading back to our rooms to shower and freshen up.

Before dinner, we were able to snag some appetizers and drinks in the bar area, while watching a short presentation by a Samburu Warrior. The Samburu people are Nilotic, meaning they are indigenous to the Nile Valley, and they are nomadic. They herd mainly cattle but also some sheep, goats and camels. The Samburu tribe speaks a version of the Maa language distinct from the Maasai people in Southern Kenya.

We had another wonderful, wine-filled dinner before calling it a night. Tim accidentally ordered a drink with ice, which he had to slurp down as quickly as he could because he forgot that he shouldn’t drink the water! Don’t worry; he was totally fine afterwards, but just remember this when ordering mixed drinks.

Unfortunately, I wasn’t feeling too great afterwards, and the evening only got worse for me. I ended up sleeping off a chilling fever and woke up the next morning with a pretty bad cough. At this point, Allison was also having sinus issues and feeling terrible, so I’m assuming we may have caught something on the flight over or were both just struggling from lack of sleep.

The next morning, we enjoyed our fancy buffet breakfast, grabbed another group shot with our Samburu Warrior friend, and loaded up the car around 8 AM to begin our four to five hour drive up to Mt. Kenya National Park.

We really enjoyed kicking off our safari trip with the Samburu National Reserve and would highly recommend visiting here if you are planning a trip to Northern Kenya!

Check out our Mt. Kenya National Park post to see what we did there, or if you want to hear about our whole African adventure down to the crazy flight experiences, long drives, lunch spots, equator demonstrations, souvenir shops, etc., check out our full Kenya post instead. And, don’t forget to pin it!